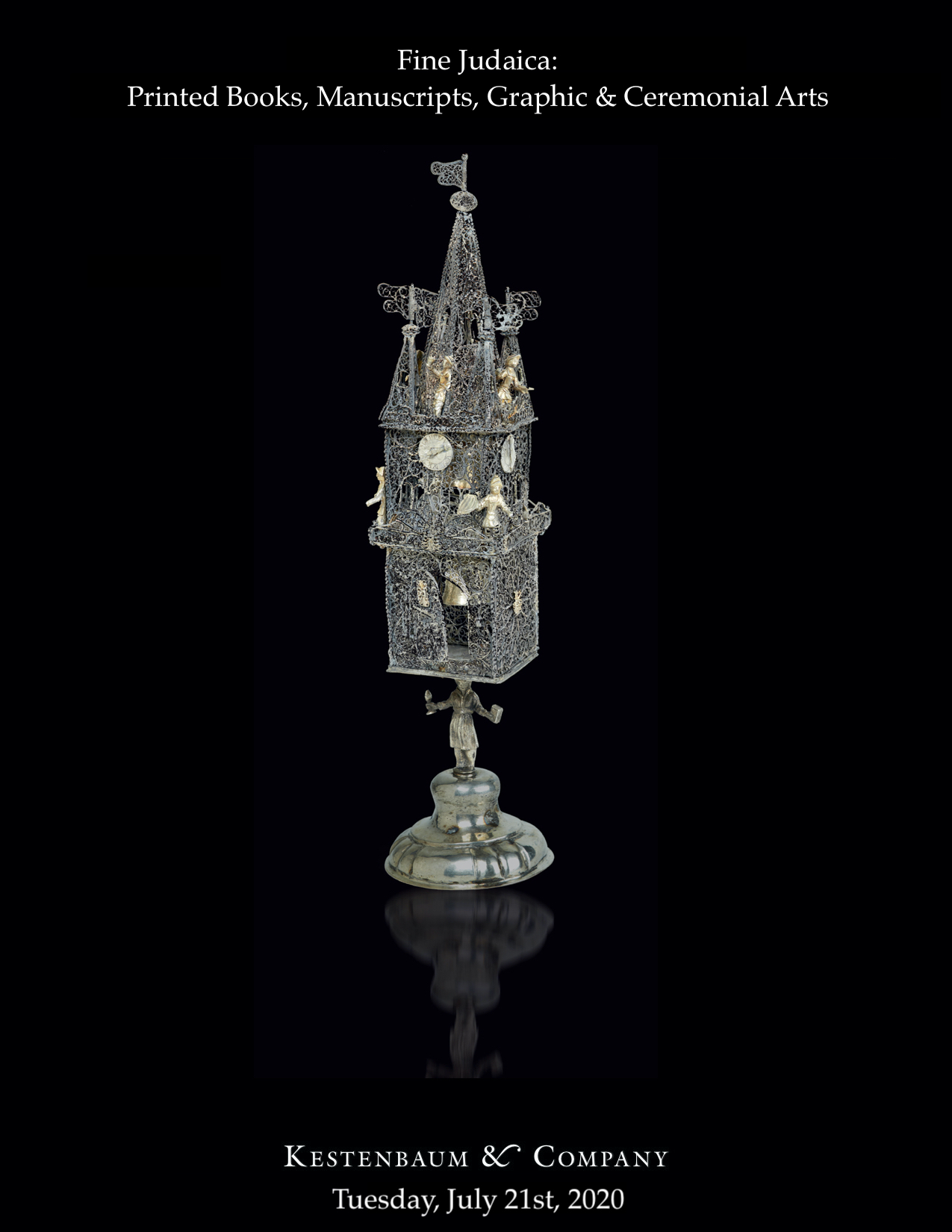 Est: $150,000 - $250,000
PRICE REALIZED $150,000
The three-tiered tower features a hinged door with latch. Each of the four sides is set with an engraved clock face. The central section houses a single bell and is surrounded by three (of four) gilt cast male figures bearing, respectively, a braided candle, and musical instruments (flute and lyre). The upper section of the tower is encircled by four filigree pennants and a further four gilt cast male figures respectively bearing, a wine-cup, spices and a prayer-book (upon which (identifying?) marks are engraved). At top rests a domed cupola with pennant (detached). The whole, set upon a (slightly later?) fluted raised circular pedestal above which stands a male figure with arms outstretched clutching a prayer-book and spices. No visible silver marks. Height 16.5 inches (41.5 cm). <<Housed in:>> 18th-century custom fitted leather case. <<AN EXCEPTIONAL SPICE-TOWER OF EXQUISITE QUALITY, COMPLETE WITH CONTEMPORARY CUSTOM FITTED CASE.>> <<Provenance:>> From the collection of a prominent, pre-war Frankfurt Jewish family (details of which will be provided to the successful bidder). The silver sheet base of this most distinctive spice-tower is typically German, yet the feature of a standing male figure, is almost only seen as part of a Havdalah Compendium. Used here in the present fashion, as part of a spice-tower, is unparalleled - and there appears to be <<no other similar such spice tower extant.>> The body of this spice-tower is also of a typical German form, with the four towers at the corners and the faceted central tower above. Yet the fine filigree work is clearly Galician. The filigree flag at top is also a regular feature of Galician towers, while the use of a clock face is a German convention. The exciting appearance of male figures, here standing on the parapets of the tower, can be found both in fine German sheet silver examples, as well as on fine filigree Galician models, and are always, most highly prized. All in all, this magnificent silver spice tower with multiple cast human figures is very much in the 18th century German style, but fashioned from a silver technique that is quite clearly Galician. <<A most unique example.>> For a similar spice-tower formerly in the collection of The Jewish Historical Society of England and subsequently sold at auction, see Kestenbaum & Company, Sale 56, Lot 5 (hammer-price, $280,000). See https://www.kestenbaum.net/auction/lot/auction-56/056-005/. The Jewish Museum of Frankfurt (JMF 87-104) possesses a similar spice tower, but not as elaborate as the one offered here (see Jüdische Türme aus Schwabische Gmünd (2001) p. 70). Also similar, but several inches shorter, is a spice-tower from the Arthur Howitt Collection sold at auction in 1932 and resold by Christie’s Amsterdam, December 10th, 2007, Lot 196. For historical context, see the learned article by Michele Klein “The Havdalah Candle Holder” in Ars Judaica (2012) pp. 31-54. <<Kestenbaum & Company is grateful to Mr. William L. Gross (Tel Aviv), for his scholarly advice; and for his expert, curatorial assessment of this spice-tower.>>
Share