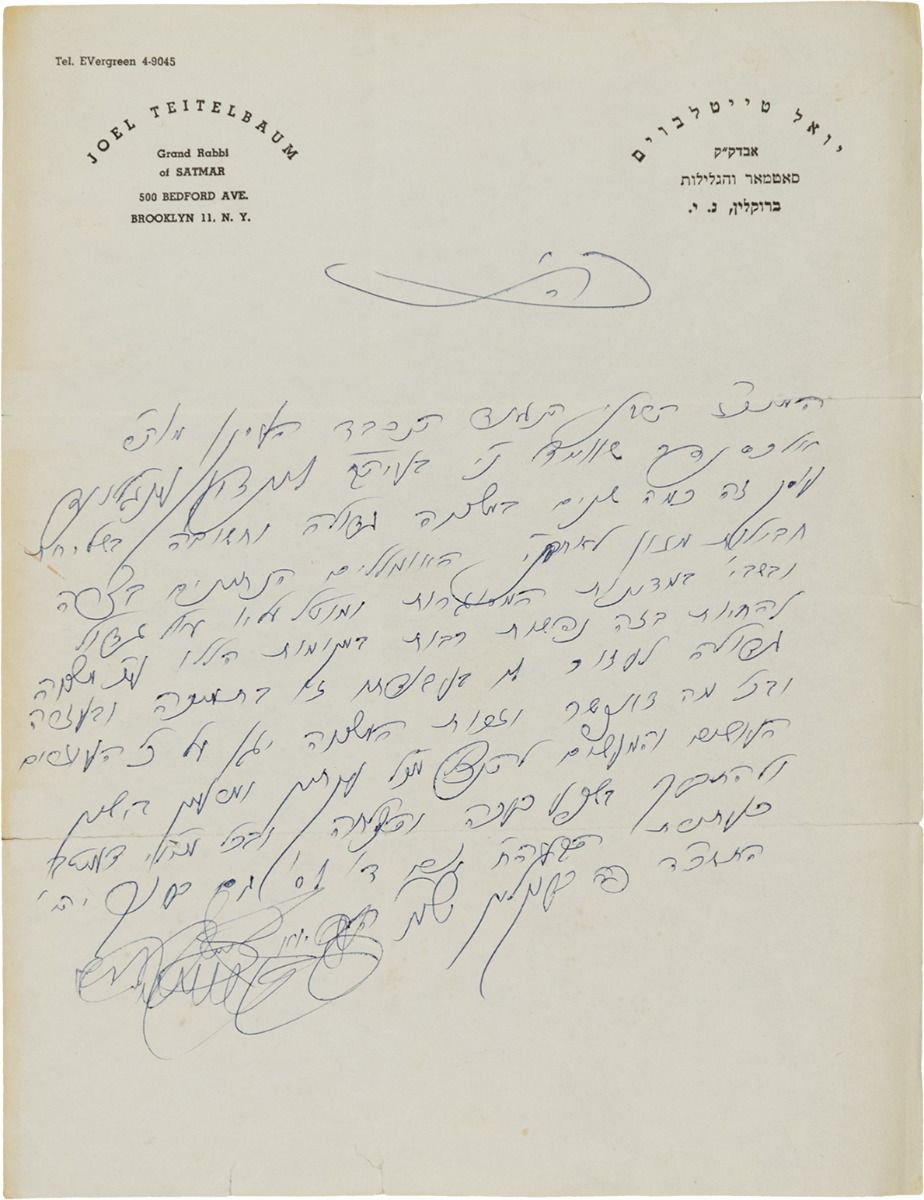 Concerning raising funds to assist Schweid who organized “the substantial and significant Mitzvah of dispatching packages of food for our unfortunate brethren who are captives in closed countries [i.e. behind the Iron Curtain].” The Rebbe blesses all those who assist in this important cause, that they merit to be saved from all trouble and misfortune and rewarded with an abundance of blessings and success (Shefa, Berachah, Vehatzlachah). Neatly taped on verso across two folds.

Est: $10,000 - $15,000
PRICE REALIZED $10,000
An historically important letter written at the height of the Cold War, displaying the Satmar Rebbe`s deep concern for those Jews trapped behind the Iron Curtain. The background as to how this letter came to be written is as follows: The recipient, the late Alexander Schweid, was the London-based director of the JRRC (Jewish Rescue and Relief Committee) an organization under the auspices of the Agudath Israel. Due to inter-communal dispute, the organization was not permitted to raise funds from those institutions that were of a Satmar persuasion. Traveling to New York, Schweid sought out a private audience with the Satmar Rebbe in which Schweid asked not only for a financial contribution toward the worthy cause of assisting Soviet Jews, but more significantly, requested that the Rebbe compose a letter fully endorsing Schweid’s charitable work. This in turn gave Schweid access to Satmar institutions world-wide for the purposes of fund-raising for the benefit of Soviet Jews. R. Alexander Schweid was born in 1906 in Kashauer (Kosice, Czechoslovakia) where he learnt under the mentorship of the Kashauer Rov, R. Shaul Brach. During the war, Schweid was deported to labor camps and upon liberation, was one of the few survivors left in Auschwitz. Subsequently he returned to his hometown of Kosice where he sought to revive religious life until Communist suppression finally drove him out in 1951. Upon settling in London, Schweid, along with the legendary communal activist Harry Goodman, worked ceaselessly to advance the cause of Jews trapped in Communist countries, efforts he continued until his death in 1989.
Share