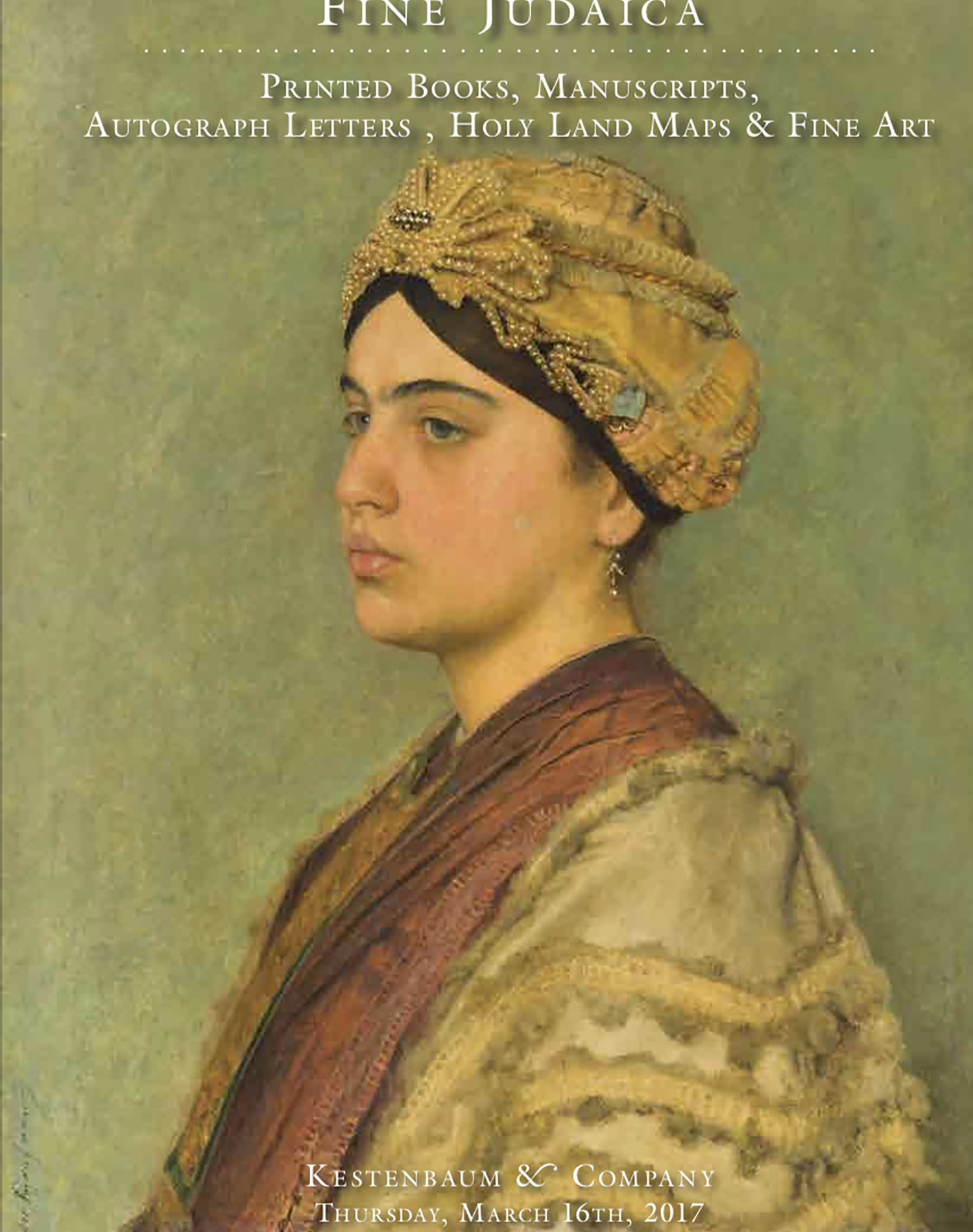 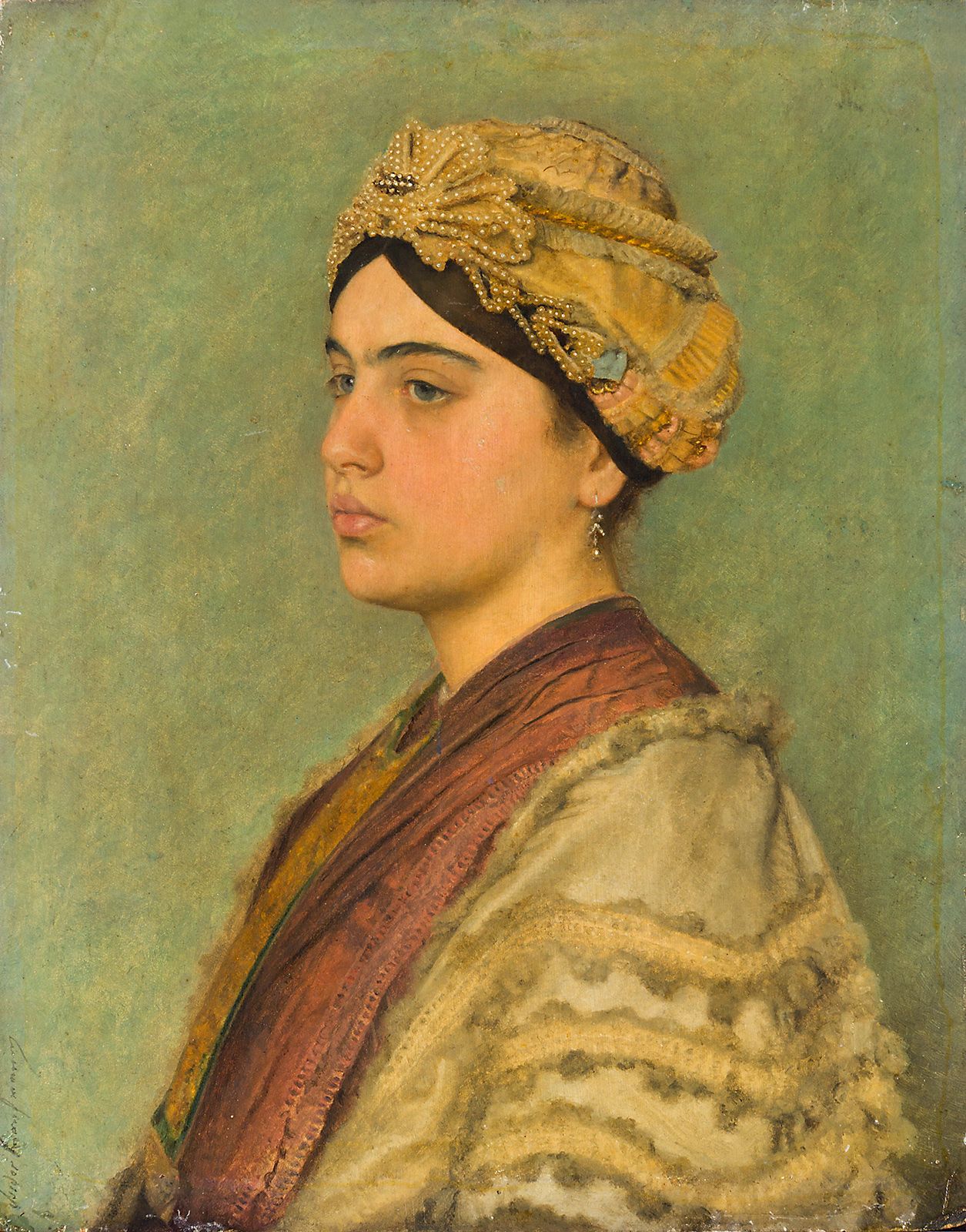 Oil on wood panel. Signed by artist along lower left margin. c. 1905. Lavish gilt frame in a Jugendstil style. Museum exhibition markings on verso. Dimensions: 31.8 x 25.5 cm / 12.75 x 10 inches. <<Accompanied by: >> Detailed letter of provenance written by the artist’s son, Philipp Kaufmann (London, 1964).
Est: $200,000 - $300,000
PRICE REALIZED $230,000
<<The most outstanding of all Jewish portrait artists.>> Th image of the Jewish Bride is particularly well-known due to Rembrandt’s iconic bridal portrait of 1667 which featured the Biblical Isaac and his wife Rebecca. That image shares many qualities with the present painting by Kaufmann, both in regard to artistic presentation and emotional texture. Artistically, our example, featuring a young woman, is, like her earlier counterpart, dressed in colors of gold and scarlet - a style of almost Byzantine opulence. Rembrandt’s version being interpreted in the fashion of the Dutch Golden Age of the 17th century and Kaufmann’s version, in the tradition of 19th century Polish refined splendor. Kaufmann’s portrait here depicts the sitter wearing the traditional garb of a well-to-do, Orthodox, Aschkenazic woman. Particularly characteristic are her head-coverings: A wig-like kupke, over which is the sterntichel - or star-form tiara made of precious stones (or in this case, pearls) - which was worn by Eastern European Jewish women on the Sabbath and Festivals. The diadem spoke of her socio-economic status, for a woman of her affluent class would often donate a stone or pearl from her sterntichel to assist a needy bride. The sitter also wears a luxuriant striped shawl trimmed with fur, which appears in other female portraits by Kaufmann. One notices a hint to the bib-like fabric plastron, or bindalik, he elsewhere incorporated. This vertical kerchief was a distinctly Jewish adornment worn by married women, known by some as a “brüsttüch.” Finally, a pair of delicate pearl earrings completes her parure. This same model, in identical costume, is seen in Kaufmann’s “Young Woman in Synagogue,” where the lady is found seated in the synagogue holding an ethrog (see Natter (ed.) Kaufmann Catalogue, p. 200). Affixed to the reverse of our painting is a letter dated 28th February, 1964, written by the artist’s son, Philipp Kaufmann, in which the model is identified as Marie Pauline Kaufmann, the artist’s daughter, affectionately referred to as “Mizzi.” Philipp continues: “My father had the greatest difficulties in finding the original old bridal costume. He finally located it in Poland.” According to Philip’s letter, the costume was displayed in the ‘Sabbath Room’ of the Jewish Museum of Vienna. This was a period diorama installed in the museum from 1899 to 1938, of the furniture, ritual objects and clothing one might find in much of Kaufmann’s works. The subject of an Orthodox Jewish woman is a painting Kaufmann created far less often than his portraits of Hasidic men. Her appearance here is one of both intimacy and serenity. Despite the modest gaze, her demeanor is calmly confident, relaxed in the supreme dignity of her faith. A belief-system that to many of her era - especially in Western Europe - viewed as a backward, dying culture, yet here, ironically celebrated and appreciated in art form by the assimilated and cosmopolitan Jewish bourgeoisie of fin de siècle Vienna. <<Provenance:>> Acquired directly from Philipp Kaufmann, son of the artist. London, c. 1964. Thence by direct family descent to the present owners. <<Exhibited:>> The Israel Museum, Jerusalem: Making an Entrance: Jewish Artists in 19th-Century Europe, 2013-14. Tel Aviv Museum of Art, Isidor Kaufmann: A Special Exhibit, 2005-06.<<. >> <<Literature:>> Mechira Pumbit [Israeli Art Journal], (Sept. 2005) pp. 16-21. Zuza [Russian Art Journal], (2006) pp. 136-141. For a very similar Kaufmann portrait to ours, presently in the Museum of Fine Arts, Boston (accession no. 2014.513) and previously in the Fuhrman collection, Santiago, Chile, see Catalogue of the Jewish Museum of Vienna, Isidor Kaufmann G.T. Natter (ed.), (1995) pp. 192-3 (illus.) entitled: “Hanna.”
Share