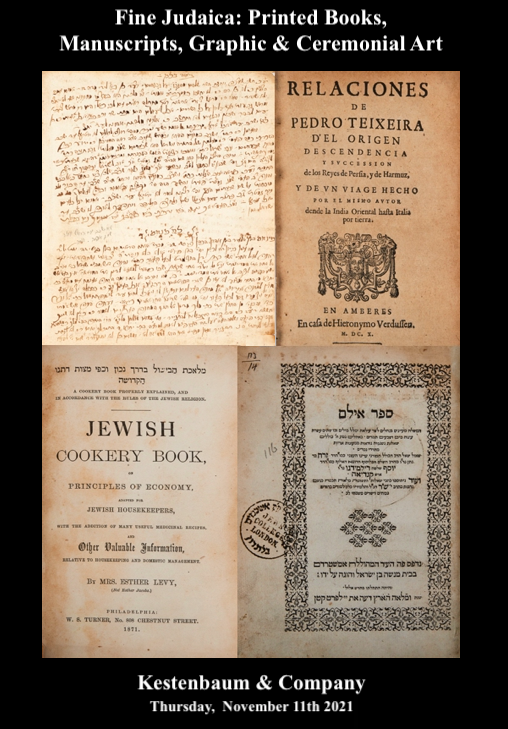 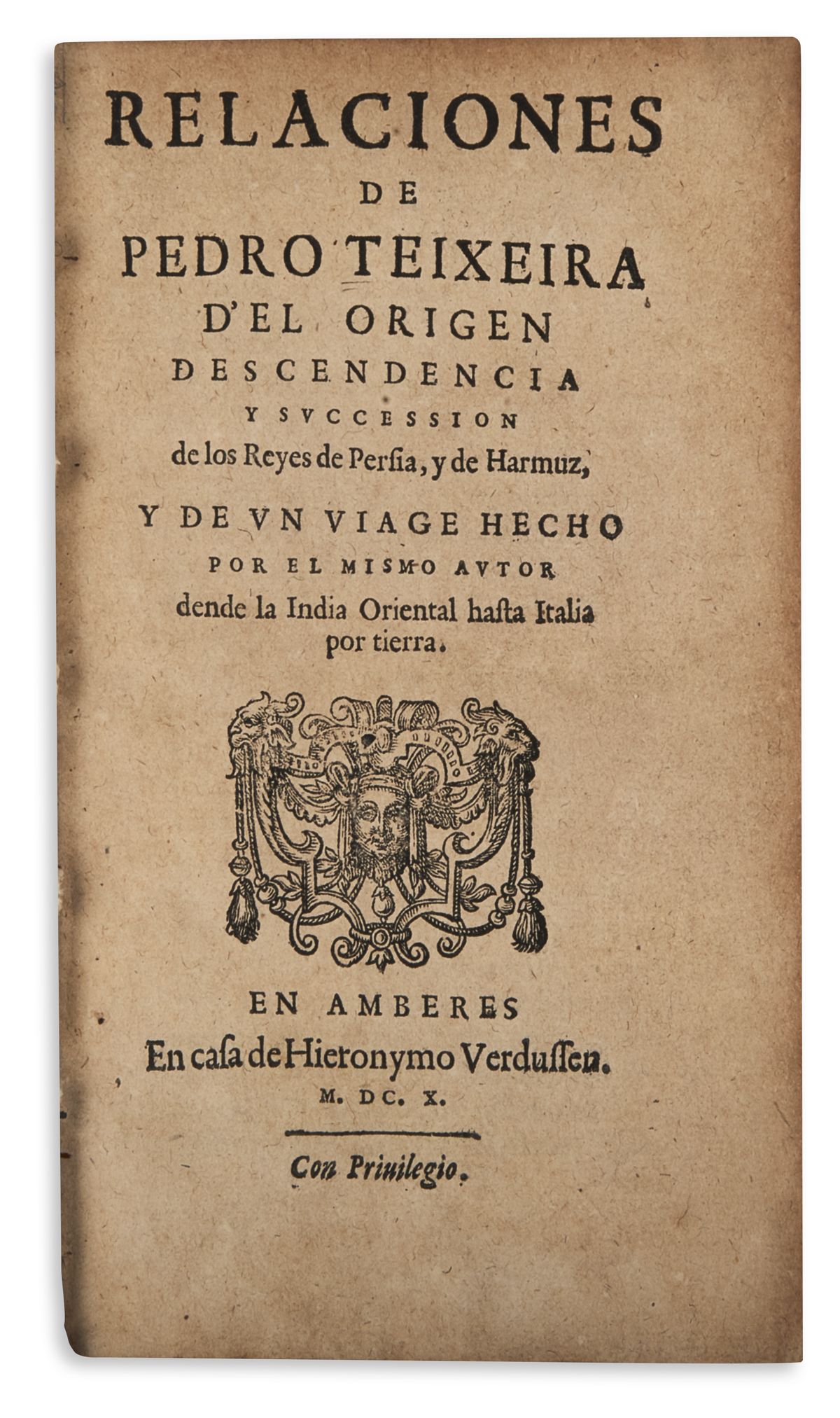 Relaciones de Pedro Teixeira d’el Origen, Descendencia y Succession de los Reyes de Persia, y de Harmuz, Y de un viage hecho por el mismo autor dende la India Oriental hasta Italia por tierra. pp. (8), 384, (8), 115 (i.e., 215), (17). Antwerp, Hieronymus Verdussen, 1610. <<* Bound With:>> Keckermann, Bartholomaeus and Alsted, Johann Heinrich. Politica Specialis Gemina Prior Polonica [parodical work of political science]. pp.70. Hannover, Guilielmum Antonium, 1611. Two works bound in one. <<Both FIRST EDITION.>> Lightly browned. Contemporary blind-tooled calf, spine in compartments, starting. In central cartouche, front and rear, coat-of-arms of J.A. de Thou (see below). Thick 8vo. Kayserling, p. 10; Palau 328892.
Est: $30,000 - $40,000
The Portuguese Marrano explorer Pedro Teixeira (1570-1650), a native of Lisbon, circumnavigated the globe. His first journey took him to China and the Philippines, from there to the Americas, and finally back to Lisbon in 1601. His second journey (1603-1609) took him to India, Persia and the Near East. The first part of this work is a history of Persia and its monarchy based on, and largely translated from, the Persian chronicle of the noted fifteenth century historian Mir Khavand. The second part is an account of the rulers of Hormuz in the Persian Gulf, and the third part contains a fascinating account of Teixeira’s travels in the Near and Far East. In his travelogue, Teixeira comments upon conditions in the Jewish communities along the way, such as Baghdad and Aleppo (pp. 174-76). In Efegél (Al Kifl, Iraq) he visits the tomb of the Prophet Ezekiel (p. 102); reports that in Baghdad he came across a dozen Jewish families who affirmed that they were descended from the first Babylonian captivity (p. 121); records a visit to the tomb of Joshua the High Priest in Baghdad, to which are attributed miracles (p. 124). Teixeira notes that the Jews who were traveling together with him in the same caravan stopped Friday afternoon: “The Jews remained there because the following day was Saturday when they could not travel” (p. 94). (Regarding the tomb of Joshua and the pilgrimages thereto by the Jews of Baghdad; and the Scroll of Joshua read on such occasions; see D.S. Sassoon, Ohel Dawid (1932) Vol. I, p.564, nos. 349-50). The travelogue also contains information concerning the <<New World>>, especially Mexico and Cuba (see pp. 57-61). Furthermore, the work is the earliest European text to make mention of <<Qatar>> (in relation to pearl fisheries of the region). <<Provenance:>> Binding with coat-of-arms of Jacques Auguste de Thou (1553-1617), French historian, book collector and President of the Parlement de Paris. De Thou’s lasting monument is his multi-volume Historia sui temporis (1604-08).
Share