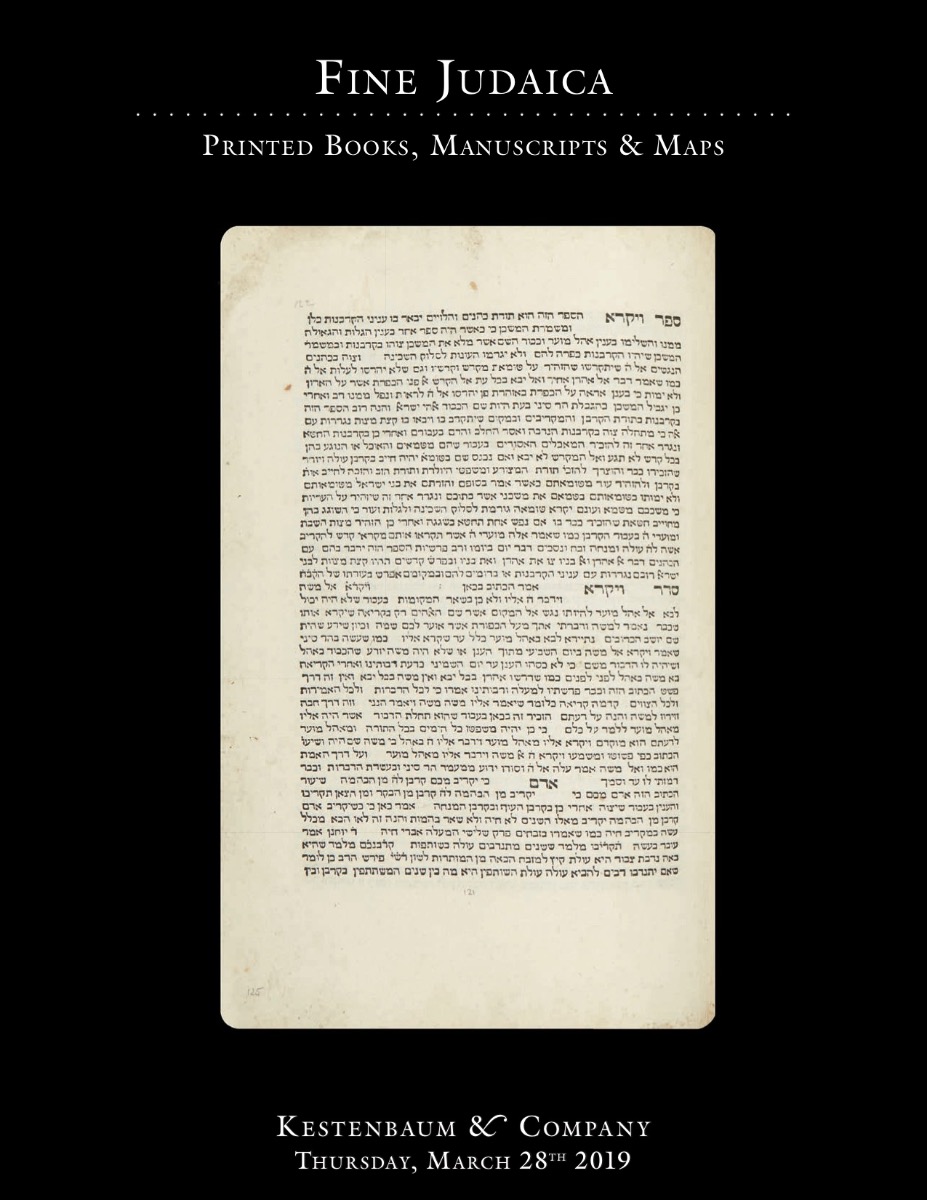 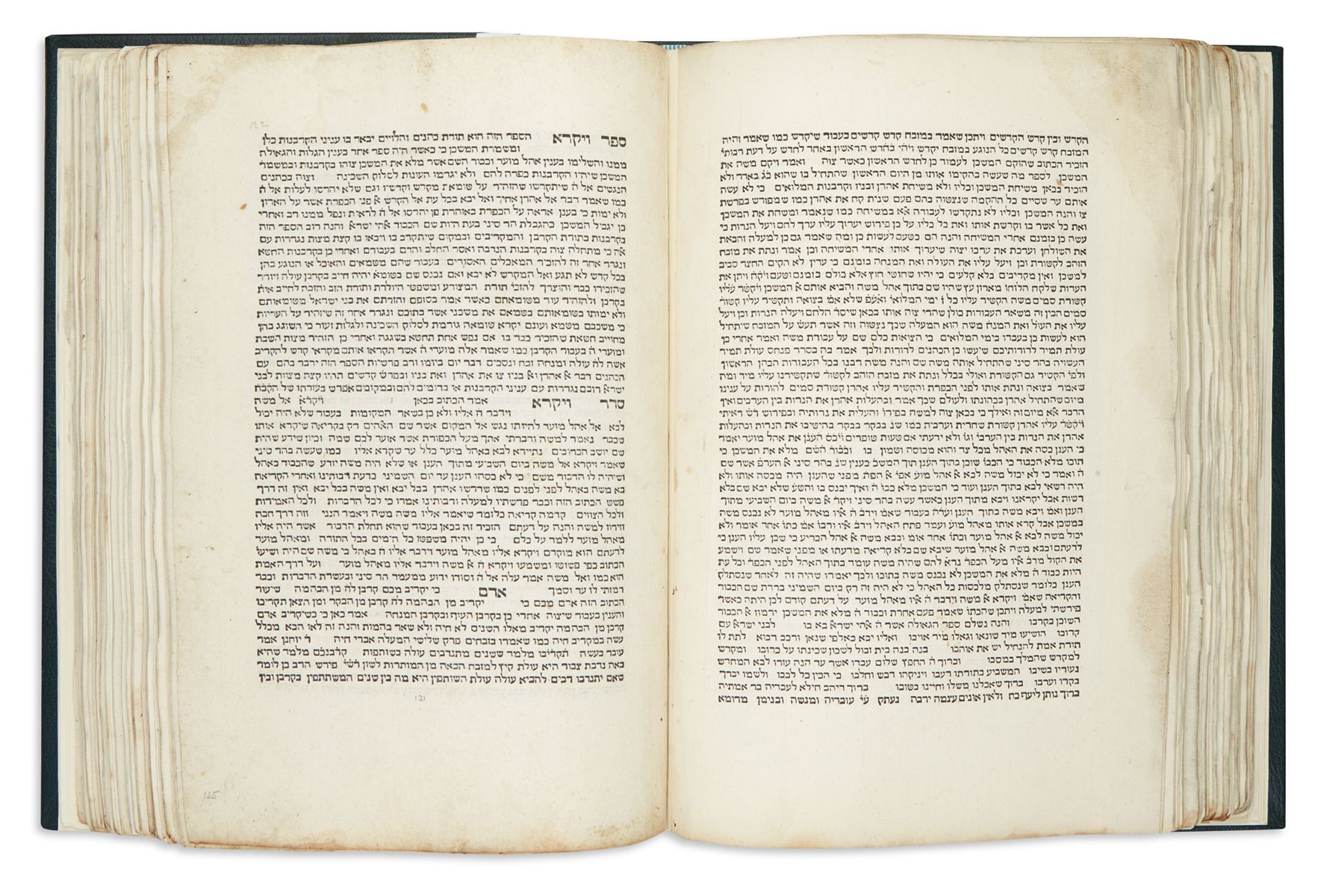 Est: $200,000 - $250,000
<<“THE FIRST PRINTED HEBREW BOOK IN HISTORY”>> (Moses Marx). Moses Marx has made a strong case that this Roman edition of Nachmanides is the first Hebrew book to be printed. The new process we call “printing” was invented by Johannes Gutenberg in, or around, the year 1436. It reached perfection in 1456 with the production of the famous “Gutenberg Bible.” The “Gutenberg Revolution” began in the city of Mainz, Germany. There, the process remained a carefully guarded secret until the year 1462, when the troops of Adolph of Nassau captured the town of Mainz. Thereafter, printing enjoyed rapid diffusion. In that same year of 1462 the first book printed outside of Germany appeared in Italy. Moses Marx contends that the three Roman printers, Obadiah, Menasseh, and Benjamin, whose names appear at the conclusion of the Book of Exodus of the present commentary (f. 120v.) were actually of German origin. (For this reason, the typeface is decidedly Aschkenazic.) The folio design was typical of Italian books of the period. It is assumed by Marx that the three Jewish printers had first worked for a non-Jewish Italian printer, and continued the folio page layout with which they were most familiar, adapting it to the needs of the Hebrew book. See M. Marx, Alexander Marx Jubilee Volume [English Section] (1950), pp. 481-501. In his groundbreaking article, Moses Marx overturned the hitherto widely accepted notion that the first printed Hebrew book was the edition of Rashi's Commentary to the Pentateuch published in Reggio di Calabria in 1475, or perhaps Jacob ben Asher's Tur printed at Piove di Sacco that same year. It is true that those are the first dated Hebrew books, however, as Marx demonstrated, based on typographical and other internal evidence, a total of eight undated books printed in Rome are actually older, having been produced in the period between 1469 and 1472. Though there have been attempts to disprove Marx (see Daniel Nissim, “Nel quinto centenario delle prime stampe ebraiche (1475-1975)” in: Atti e Memorie dell'Accademia Patavina di Scienze, Lettere ed Arti, 88 (1975-76), pp. 49-51), Marx’s hypothesis has been buttressed by recent findings concerning the watermarks on the paper of these incunabula. A.K. Offenberg noted that the watermark of a crossbow in a circle found in Nachmanides' Commentary recurs in at least five editions of Sweynheym and Pannartz and of Ulrich Han published in Rome between 1469 and 1472. Subsequently, Peretz Tishby, former librarian of the JNUL, adduced additional proof by comparing the watermarks of these early Roman Hebrew books to a Latin edition of Augustine's De Civitate Dei printed in Rome around that time (dated 1474). See A.K. Offenberg, Catalogue of the Hebrew Incunabula in the Bibliotheca Rosenthaliana in: Studia Rosenthaliana 5:1(1971), pp. 132-133; P. Tishby, Hebrew Incunabula in: Kiryath Sepher 58:4 (1983), pp. 808-852.
Share